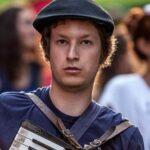 Disclaimer: Investing into products of the “crypto-world” currently contains high risk. This article often reflects the autor’s point of view and should not be taken as a standardized or proven investment strategy. If you really want to invest seriously into such kinds of products you need a basic understanding of the (technical) concepts behind otherwise your strategy is based on pure speculation.

What are “blockchain products”?

The word “blockchain” is overloaded. The term is used in the context of decentralized networks, but also for different kinds of ledgers (people even refer to IOTA as a blockchain product, although the underlaying ledger is graph-based rather than relying on a block structure). Furthermore, the term blockchain is often used in the context of products that are actually built using features (e.g. smart contracts) of blockchain based networks (e.g. Ethereum).

In the context of this article we refer to a whole variety of products that stand behind the word “blockchain”. We will mostly refer to ledgers in general and not to specific blockchain implementations unless the blockchain is of importance for a specific use-case. From a general perspective we may distinguish two main kinds of “blockchain products”:

In the context of this article P2P networks are thus not general P2P networks but we refer to ledger based (mostly blockchain) networks. Typical public P2P networks are for example Bitcoin, Ethereum, Lightcoin, Cardano, NEM, NEO and EOS – but also IOTA and Byteball. Note that one could also refer to these networks as “platforms”, but in some cases that is misleading, because (decentralized) applications can in some cases also be classified as platforms.

Typical (decentralized) applications are products that use e.g. Ethereum smart contracts. Examples are TenX, Bankera, Modum, Quanta and many many more. Such kinds of applications often include a connection to real world use cases, rather than just the exchange of “crypto assets”. For Modum the real world use case is actual pharmaceutical shipments. Ethereum is used for certifying the validity of the shipment by evaluating shipment sensor data in smart contract.

Note, that the term “Decentralized Application” (DApp) is also overloaded at the moment. There is no standardized specification for DApps yet. In the context of this article we also classify products as DApp that might contain centralized parts (like a server to store e.g. user data) but utilize a decentralized network for other (data) aspects.

The distinction between networks and applications is not always 100% clear. Some products are ledger and application at the same time. Examples are Steemit or SIA which both integrate a product for a specific use case on a (product-specific) underlying ledger.

Of course general rules of investment apply to blockchain products as well as any other product out there. Most importantly one should only invest into something if one understands it – otherwise it is pure speculation.

In the first section we already learned that it is not always easy to classify a “blockchain product” – there are numerous kinds of products out there and it is often in-transparent or difficult to understand what a product actually wants to achieve or which technologies the product is or will be built on. In the next section we provide a general rule of thumb for making the high level decision what to invest into. In the last section we will show possibilities how to rate blockchain products once you decided what to invest into.

It is difficult to rate blockchain products as the whole market is still young and best practices are still in the making. The recent hype of those products also shows a tendency of (especially newcomers) to just invest very short-term driven to make “fast money”. Additionally, the “fear of missing out” (FOMO), a psychological effect, drives people to make irrational decisions without thorough research or investment strategy. The author personally prefers to rate products for long-term investments.

In the crypto-world coins are represented directly on the the ledger and are comparable to FIAT-currencies – just without central institutions such as banks. For blockchain based crypto-currencies money creation is regulated by the ledger’s protocol.
Tokens on the other hand are depicted by Smart Contracts. Usually there is one contract that depicts the token as such and one contract that regulates the initial sale, ownership and trading of the tokens. Token contracts can be created by anybody. The amount of tokens and how the token can be traded is regulated by the creator of the contracts. 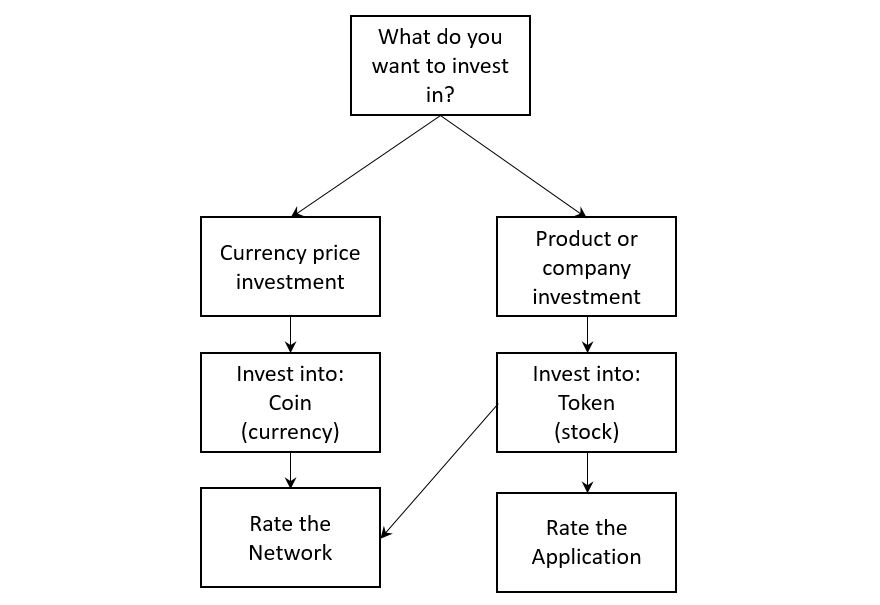 Investing into a coin (e.g. Bitcoin or Ether) is similar to investing into a specific FIAT-currency (e.g. Yen). Due to the fact that there is not much regulation and the amount of crypto-currencies is often not that high (compared to FIAT currencies) crypto-currencies are often more volatile.
From our point of view, one important fact is also, that there are not many real world items that one can buy with crypto-currency which makes the whole market more volatile. Since the value of the coin is not backed by anything in the real world speculation is a bigger factor (because it is basically the only thing one can really do with it at the moment).

Investing into a token is similar to investing into stock like the stock of e.g. Volkswagen. In most of the cases tokens represent shares of a company. Actually one can depict other concept with tokens, like reward systems or voting mechanisms but that is not important for this article. Similar to stocks tokens are initially given out by a company through pre-token-sales (often called pre-ICO) and then token-sales (often called ICO – initial coin offer). Thus one can buy tokens during an initial sale or pre-sale or one can buy them from other people through central exchanges, where the exchanges define the rates according to supply and demand.
Note that most ICOs are actually token sales that do not offer actual coins in the sense of a coin regulated by a ledger’s protocol. Unfortunately, this distinction is often not made clearly.

In early stages, networks often do token sales in order to get funding for their product. These tokes are usually trade-able against the coins of the network’s ledger once a first version of the network (the client software) is productive. In order to invest into an actual coin, the network has to be operational already. If you buy tokens for a network that will exist in the future you have to trust the creators of the network to build in the functionality to cash in your tokens against coins.

Rating a blockchain product as investor

When people invest in stock they actually have access to the stock-company’s financial reports online. Certain key-indicators have to be published by every stock company (usually in a quarterly report) according to the laws of the country where the stock is to be listed on a stock-exchange.
When it comes to crypto-assets for most counties, even when it comes to the legality of Bitcoin, there are no clear regulations yet. Especially companies that offer tokens often don’t have much more than a blurry product vision and a fancy homepage. Who is really behind the product, the roadmap, the company funding and implementation details remain unclear.

Although there might not be key-indicators available we can still rate blockchain products by certain criteria. Even if one is not a blockchain expert one can stick to some characteristics to figure out if a product has a certain level of credibility or not. Many of the factors described here relate to the model used by the Coincheckup platform. Coincheckup offers a good first overview for most of the networks and applications currently available. In order to really understand a product one should, however, do research by oneself and not just rely on Coincheckup.
When rating a product one can distinguish between networks and applications again – but many of the factors actually apply to both sides. The following chart shows some criteria that can be used to rate blockchain products. 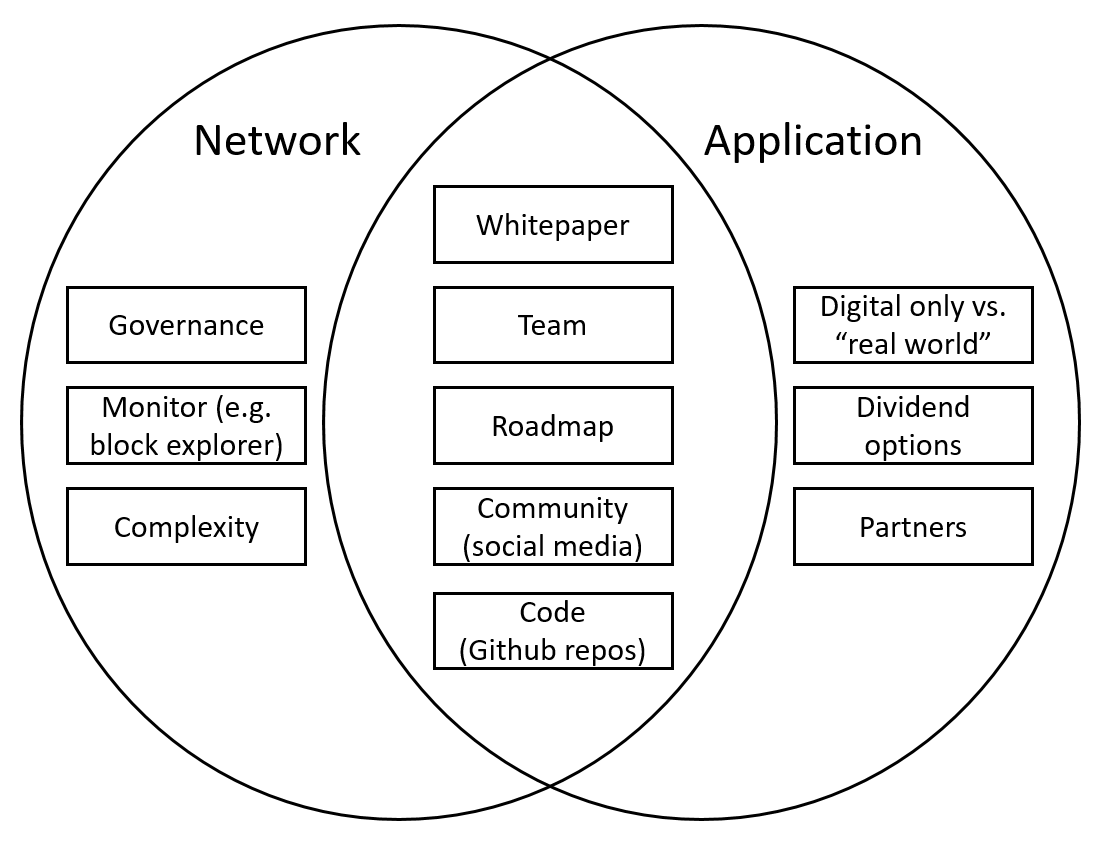 The first entry-point for almost any blockchain related product is the whitepaper, usually a PDF document that explains the idea and concept of the product. One can roughly distinguish four kinds of whitepapers:

Through the whitepaper one gets a first overview what kind of product is planned. The whitepaper alone does, however, only offer a first insight. Other important factors have to be checked before the level of credibility can be determined.

Team and roadmap are important to check on the credibility of a product. Especially when rating a network one should take a close look at team members’ standing in the community. If one is capable of doing so it is also recommended to check the repositories of the product on Github. Generally, when developing a product that is based on a public network, the code should be publicly available (at least for e.g. Smart Contracts). If that codes is not available the product does not have much credibility.

Factors that are additionally important for networks range around monitoring of the network, governance, regulators and the complexity of the product in general.
One simple rule here is: If there is no block-monitor (or generally network monitor) available yet (at least for a testnet), then there is not much implemented yet.
Governance can be rated by the structure of the team around the product. For Bitcoin for example there is no specific organization behind the network (besides the Bitcoin-core team on Github), whereas for Ethereum there is the Ethereum foundation that might pose as entry point for regulators in the future. The influence by regulators (e.g. governments) will have more impact on the legality of blockchain products in the future, so it is not a bad idea to take a look at the product team’s position towards regulators.
Finally, complexity can be an issue – if a product puts too many complex features into one product it is questionable if the product will ever exist, or the product might undergo radical changes on the way to success. A good roadmap can help to shed light on the features that are planned. An Example for a good roadmap is the roadmap of Cardano because it not only shows time and features but also responsibilities.

For applications one interesting aspect is, if the product focuses on the blockchain as such or if a real world use case is in focus, that has a benefit from using the blockchain. Some people think, that decentralized networks will have an even bigger impact once big amounts of data are available on chain and we apply artificial intelligence to that data. At the moment this is just future talk. Applications with real world use-cases rely on partners and industry specific expertise. Here it is important to take a look at the partnerships and to validate that they actually exist as stated.
For investors one aspect that one should definitely take a look at when it comes to investing into an application is a possible dividend. If the company already puts such kind of options into the an ICO contract it is definitely interesting. If the dividend is contract-regulated (as part of the product) it is even better. This is, however, very seldom.

Although it is not possible to rate blockchain related products from a KPI perspective like regular stock, it is possible to evaluate if a product has potential according to certain basic aspects. Investing into such kind of products still comes with very high risk and with high risk comes high profit, but also loss.

We think that many products, especially on the DApp side, will not survive the current hype. Many products out there have a very low level of credibility when one evaluates the factors above against the product. Hopefully the future will bring products that stick out by actually e.g. offering protocol-based dividend options for their investors.

Unfortunately the real world is not as simple as Dilbert’s…